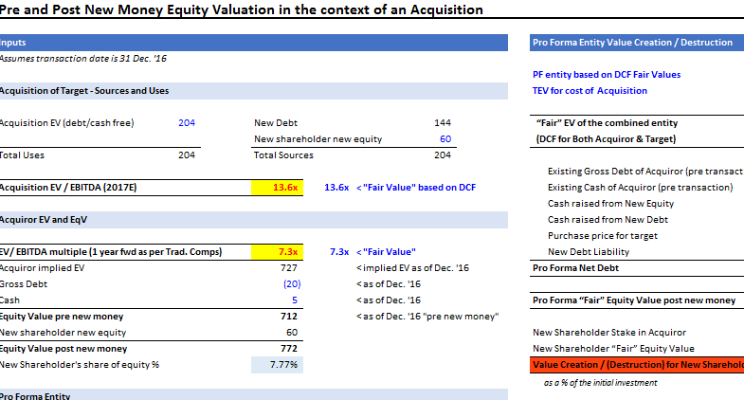 One of the frequently misunderstood issues in company valuations is the distinction between pre-money and post-money value.

The first important thing to understand is that there is no such thing as pre-money or post-money Enterprise Value (EV). By its definition, the EV is independent from the company’s sources of financing. Therefore, the EV does not change if new equity capital is injected in a company.

In absence of synergies, integration costs, and overall risk profile of the combined entity (i.e. WACC being equal before and after the transaction), the post-transaction “fair” Enterprise Value is merely the sum of the Enterprise Values of the Acquiror and the Target. Both can be calculated using the Discounted Free Cash Flow to the Firm methodology (DCF). This is shown from column T onwards and – again – it is totally independent by the financing sources of the acquisition.

The distinction between pre-money and post-money value is only relevant as far as the Equity Value goes. The new shareholder (whose money is being used to finance the acquisition of the Target) will have to place great care in understanding:

The two parameters above will determine the relative outcome of value creation or destruction for the new shareholder.

The effect of 1. (Acquiror pre-money equity valuation) can be shown by changing the input in cell H16. In our example, the “fair” Enterprise Value of the Acquiror is 7.3 times its stand-alone 2017E EBITDA, which translates in a pre-money equity valuation of $712 million. Editing this value to – say – 9.0 times EBITDA translates in a $885 million pre-money equity price or a value destruction of $11 million for the new shareholder (cell R23) or 18% of the $60 million investment. Conversely, were the Acquiror to offer its shares at – say – 6.0x EBITDA, the new equity shareholder’s value creation would be $12 million, or 20% of its initial investment.

The effect of 2. (price paid for the Target) is instead shown in cell H12. The “fair” Enterprise Value of the target is 13.6x its 2017 EBITDA: a lower or higher acquisition price can result respectively in value creation or destruction for the new equity shareholder. This can be shown by amending the input in cell H12.

Happy to take any comments / observations.

Vasilis is an Investment Banking professional in a corporate finance advisory firm in London.

They share a professional and personal interest in Corporate Finance and Valuations.