Bitcoin, Blockchain, Ethereum, the DAO – What’s in it for the Private Equity industry?

After a brief overview of Bitcoin, the blockchain technology, and the direction it is currently evolving to, we make the case that Private Equity managers (General Partners, GPs) could adopt a blockchain-based fundraising and investment process similar to the DAO (note: I was writing this article when the DAO was attacked by an unkown individual, who syphoned out an equivalent USD 59 million from its account, see at the bottom for recommendations). This could help enhance LPs oversight, possible reducing monitoring costs, augment liquidity in the secondary market while diminishing the role played by brokers, and ultimately increase transparency.

If you are willing to discuss about the proposal below, work together on coding or implementation, please contact me at info@massimilianoterzi.it

There has been a lot of noise in the last couple of years around Bitcoin, the first virtual “cryptocurrency” ever created. Most of the financial community balked at its rapid price increase (from nothing to more than 650 US dollars in less than 5 years, with a peak of more than 1,000 dollars), which made early adopters extremely rich in just a few years. And those early adopters were not reckless financiers working for some international trading firm. Instead, they were a bunch of computer-geeks spending their days in dusty university libraries. That made the whole even more interesting and “picaresque”. 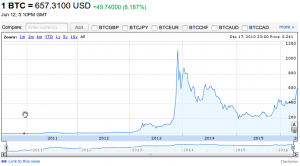 Despite and along all the glamour, many finance professionals and computer literates were quick to realize a fundamental truth: the true value of Bitcoin does not lies in the easy bucks that can be made by trading its price volatility, or taking direction on its relative value vs. the Dollar. Rather, it lies in its infrastructure, the architectural framework upon which it is built, and of which it just constitutes a corollary. This is the so-called blockchain. The legendary creator of Bitcoin, hiding behind the pseudonym of Satoshi Nakanomoto, combined together three pre-existing technologies [peer-to-peer networking, cryptography, software programming] and donated to the world this new wonderful tool. The blockchain is Bitcoin’s true innovative feature.

It is outside the scope of this article to explain exactly how the blockchain works. For now, it will be sufficient to define the blockchain as a secure, peer-to-peer online-distributed public transaction registry. Transactions are recorded in blocks and complex cryptographic algorithms ensure that no-one can amend past transaction blocks. Moreover, everyone can see the blocks that were added in the past, and new blocks can be only added when there is a consensus. It follows that the blockchain solves the issue of the “double-spend”: it is “impossible” to execute a transaction if the corresponding amount of digital currency is not owned, and the same amount cannot be spent twice. In addition to that, the initial money allocation (the “genesis block”) is given, and money supply growth is governed by a deterministic mathematical law. This creates trust in the system and prevents inflation drive by a central authority. It also made possible that a virtual token like Bitcoin (based on the blockchain) can effectively be used as a currency, functioning as an exchange medium, measure and storage of value, with no central bank guaranteeing its convertibility.

Demand of Bitcoin has quickly sky-rocketed, given the “hype” that surrounded this new invention, the initial lack of regulation and taxation on ownership, and the anonymity of transactions. As interest and adoption grew (even for illegal purposes), the dollar-price of buying one Bitcoin increased as I mentioned at the beginning of this article. Furthermore, since its creation many startups began offering cryptocurrency-related services and implementing Bitcoin and the blockchain technology in their daily businesses. Cryptocurrency exchanges, professional mining farms, crypto-wallet providers, producers of mining hardware, just to list a few. In addition to that, several alternative cryptocurrencies have been created, often around little amendments to the original Bitcoin implementation protocol and each running on their own blockchain.

Amongst this flourishing ecosystem, Ethereum has been the one initiative that has earned widespread success and significant attention from blockchain enthusiasts. Ethereum implementation started during the period 2014-2015, led by a multinational team put together by the visionary 21-year old Canadian/Russian entrepreneur Vitalik Buterin. The enthusiasm was well justified: Ethereum team managed to implement a Turing-complete1 programming language on top of a Bitcoin-like blockchain. This programming language was named Solidity and its syntax is similar to Javascript, which is already familiar to a few generations of coders. Thanks to Ethereum, programmers can now execute pieces of code (so-called “smart contracts”) on a blockchain. In other words, they can design and run a software on a blockchain. The best thing of programming language is that it can handle conditionality: I can structure my code to have a transaction executed ONLY IF certain conditions are verified, which was impossible to do with Bitcoin. Of course, one has to pay a fee for running software code on the Ethereum blockchain, which serves two purposes simultaneously: a) as a reward to compensate for the cost of computing power to those that connect their machines to the network (nodes) and b) help to maintain the blockchain and to perform the required comp

The DAO (stands for Decentralised Autonomous Organization) is one of the largest and most ambitious Ethereum software applications written thus war. It started its “fundraising” in 1H2016 and collected more than USD 100 million in Ether virtual currency equivalent. The DAO is essentially an automated, Ethereum-blockchain-based investment vehicle. In exchange for virtual Ethereum currency subscription, those individuals who funded the DAO (let’s think about them as LPs) received virtual DAO tokens. The DAO’s Curators (a group of Ethereum and Bitcoin experts, including Vitalik Buterin himself) will submit proposals to the DAO, in form of smart contracts inputs. These proposals will be examined and voted by the DAO token-holders, in proportion to the amount contributed during the fundraising stage.

What’s in it for the Private Equity industry?

I believe the Private Equity industry could greatly benefit from a DAO-like setup, perhaps when the times are ready and the prototype is tested, developed, and made more user-friendly via an appropriate User Interface (UX) design.

At present, I am not aware of any alternative that replicates a similar setup for the Private Equity industry: i.e. a publicly available, fully secure, decentralised platform on which it is possible to do primary and secondary transactions, and vote on the proposals of the GP.

It is just a matter of time until the Private Equity becomes fully “digitised“. The main drawbacks and potential obstacles to adoption of a blockchain solution are, in my opinion: